The Doctors Get To Work.. Saving Lives 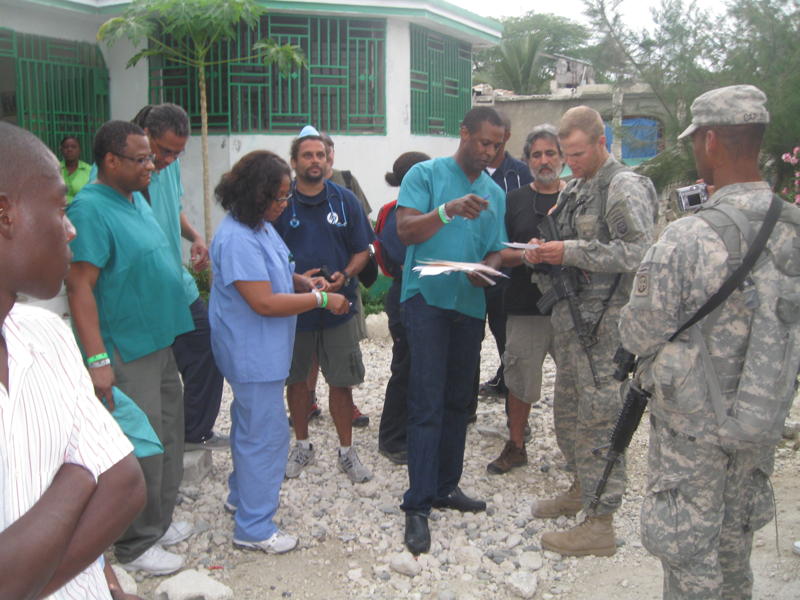 Time To Hand Over The Baton. Another Team Arrives, As We Depart.. 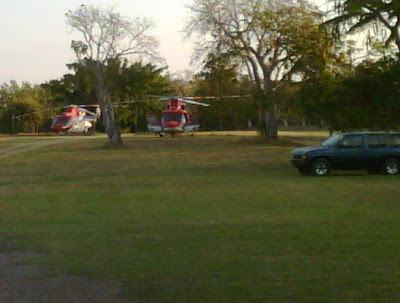 No doubt this will be the last installment written in Haiti for this mission. We are schedule to be flown out of Port aux Prince by Mark Byrne of Longtail Aviation and Flagstone Re. It is time to say Au Revoir to Haiti; yes, until we meet again. On the drive to town, it was apparent that the earthquake did not crush the will of worshipers to gather for Sunday services. Many churches have been decimated, forces services outside. Churches are not only places of worship in Haiti, the compounds also serve as living quarters for the members. I visited one church this morning and several of their parish members died in the melee of the earthquake. This church held their service under a canopy made out of an army parachute. This is also were the congregation sleeps at night. The Pastor defiantly reassured me that they would rebuild but he confessed that he did not know from where the money would come. Haitians are simply not built to break. If I was a betting man, I would place my money on this preacher and Haiti to overcome any obstacles.

We completed a total of 115 surgeries with today's procedures. Unfortunately, there are so many patients that require procedures and ongoing care. We are now tasked with staffing and securing funding for this lonely outpost of a clinic. Again. If "faith the size of a mustard seed can move mountains" I would wager that Phillip Rego and his Ministry will be providing excellent medical care to the needy for a very long time. For the moment, this weary surgeon and his team will have to be rotated to the back of the battle field. We will eternally grateful for the steadfast dedication, work ethic, and love the surgical gave without hesitation. Dr Alicia Stovell-Washington worked tirelessly and seemingly effortlessly, often outside of her field of training. For this she is deserving of a medal of honour or the Bermuda equivalent. Our surgical technicians were no less impressive in their devotion, sacrifice, and tenacious will to achieve our goal of providing world-class surgery to these humble Haitians in their hour of need. We would also like to extend a debt gratitude to Lois Wilson and Dianne Flood who, from Bermuda planned, worried, and willed us through this mission through their words on encouragement and their deeds. We would also like to thank Dr Stanley James and the EMTs (Erin Lovell and David Foley), who participated in the mission. Additionally, the two surgical techs - Derrick McLin and Derrick Washington.
Their contribution will not be easily forgotten. Finally, this mission would not be possible were it not for the vision, sweat, blood, and tears of the beknighted Phillip Rego. This is a humble man who performs noble acts with the stealth of a "thief in the middle of the night.". He represents the best that Bermuda can be and we are proud to have shared this pivotal moment in the history of Haiti with him. We leave in the knowledge that Haiti will survive and thrive. We are taking with us some life altering lessons on dignity in the face of overwhelming despair and triumph on the precipice of crushing defeat. We leave a part of heart here with the promise that we return and continue the work that we have started. Au Revoir, Au Revoir Haiti: Until we next meet. 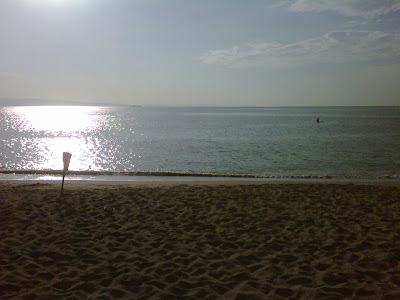 Dusk at Montrouis. The mission is now over. 115 surgeries completed. This is a picture of contrast: There is a fisherman close to the shore and an aircraft carrier in the background.
Posted by Veronica's Story at 1:52 PM No comments: 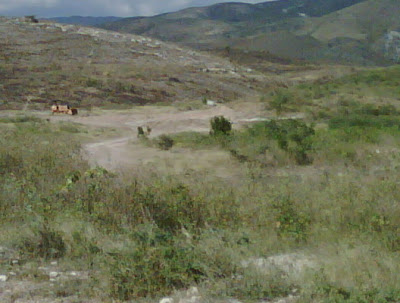 Site of mass graves for victims of the earthquake. Located just north of Port aux Prince.
Posted by Veronica's Story at 1:37 PM No comments: 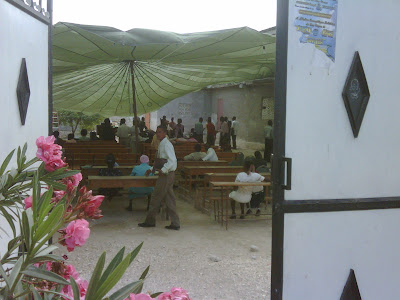 Posted by Veronica's Story at 1:35 PM No comments: 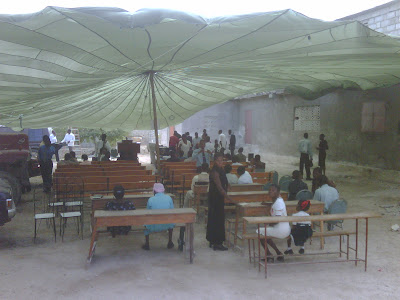 Church service was held for this congregation under a parachute made into a tent. Many of the parishioners were killed during the quake. The Minister plans to rebuild but he does not know where they will get the money.
Posted by Veronica's Story at 1:32 PM No comments:

Today we operated on 6 patients bringing our total number of surgical procedures performed during this mission to 103. We treated a 5 year old with 2nd degree burns of the abdomen. She fell into an open fire whilst playing. Her mother and 3 other siblings have been living in a car since the earthquake. Our unsuspecting patient fell into a fire used for cooking. The mother was hungry, exhausted, and nursing an infant of 2-3 months in age. We had purchased rice, onions, and noodles for our lunch but these were quickly passed on to this family that needed sustenance more than we did. (See photos below..)

Our clinic ended early and I took a motorcycle ride to the center of town. As I moved closer to the epicenter, I felt as though I was descending into Dante's circles of hell and suffering. The excessive magnitude of the earthquake is underscored in the accordion-like toppling of multistory buildings. Whilst the world has seen the front of the Presidential palace with its fallen domes and collapsed central roof, few have seen the back of the palace which looks as though an enormous machete simple surgically sliced off the posterior walls. You look into the offices as one would a doll house that has missing walls. The number of shattered buildings is overwhelming and I did not realise how affected I was until I felt moisture on my cheeks, which much to my surprise proved to be tears.

In the vicinity of the Presidential Palace are tent cities set up in the Parks, known as the Champs de Mars. If Port aux Prince is Dante's Inferno then the tents cities are incarnations of his Purgatory. The people are calm though visible worn by either trauma or hunger or perhaps both. This notion that we need security is simply ludicrous. There is order, as can be seen with the vendors, port-o-potties, and areas to wash. Statues of the heroes of the independence movement of Haiti (Henri Christophe, Jean Jacques Desaline,Pontion) loom high above the tent cities; they appear like shepherds mourning over troubled flocks.

Dante's final canto in the Divine Comedy is Paradise. Though it is imagine that anything other than despair could exist at the Heart of Darkness of this earthquake;I can say I found hope in the smiles of children playing in the tent city. I saw expectations for better times every time I heard someone shout God Bless America to a US Soldier. This moment, this tranquility, this honeymoon period will not last forever nor is it unconditional. Haiti will need partnerships in rebuilding for a long time and we shall all be held accountable. When CNN, the BBC, FOX News all turn their attention to some more newsworthy event: Haitians will still be caught somewhere between the Inferno or Purgatory, unless the world take this on as long term project similar to the Marshall Plan that rebuilt Europe after WW II.
Posted by Veronica's Story at 4:39 PM No comments:

The front of the Presidential Palace.
Posted by Veronica's Story at 4:35 PM No comments:

About The Blog Host

Veronica's Story
Veronica's Story is a nonpartisan 501c(3) recognized organization under the articles of the IRS. We advocate for orphans and vulnerable children. We empower women and girls. We have created a tradition of trust with a completely volunteer effort that started in a Washington, DC newsroom many years ago.